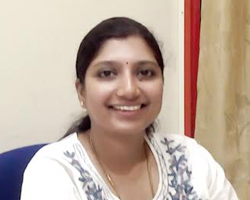 Dr. Hitha Shetty our consultant opted for this profession with the sole intension of serving the human kind. Graduated from Alva’s Ayurveda Medical College Moodbidri, Karnataka, a well known institute known for its academic excellence. She also holds a Master’s degree in Panchakarma which is a popular and most widely practiced branch of Ayurveda all over the world.

During her career, she had an opportunity to be practically trained under the guidance of renowned Ayurveda physicians in India. Hence her years of experience in treating the illness with utmost care helped the patients recover faster.

She has attended and presented in various national and international conferences. Her ambition is to establish Ayurveda as a universally accepted science.